This year’s Finale of the Great Orchestra of Christmas Charity is already the 30th fundrising of the foundation. The first nationwide finale was held on  January 3, 1993. Over 3.7 million PLN was collected and the money was donated for the treatment of children with heart diseases. It is usually for the benefit of the youngest patients that the Orchestra plays for. Eximius Park plays together with WOŚP.

To play and to help.

As says the co-founder and most recognizable personality of WOŚP, Jurek Owsiak, the action was born spontaneously. It was a response to the difficult situation of the Child Health Center in Warsaw. It was to be a one-time collection in order to purchase medical equipment, which happened to be broken. Jurek Owsiak, who was working at that time (1992) in Polish Radio Trójka, informed on air about the difficult situation of the hospital. Unexpectedly, listeners began to send donations to the radio. It was an impulse.

The first collection, sometimes called the semi-final, was held at the festival in Jarocin (the oldest Polish Rock Festival) in 1992. It managed to collect about 40 thousand PLN (in today’s terms). Its organizers decided to follow the blow and organize a nationwide collection for the Child Health Center in the summer of 1993. “Jarocin gave us the impulse to do something on a larger scale in the summer of 1993. It was to be a one-time action, organized in cooperation with television – says Jurek Owsiak. – We were told by the television that summer was out of the question, all the broadcasting vehicles were occupied, but they would be free in winter. It was just a coincidence, but fate was watching over us, because it turned out that organizing the event in the winter was a hit.” By this coincidence, the first Sunday of the new year became in Poland, sort of  celebration of national charity.

For 30 years the Great Orchestra of Christmas Charity has become the most recognizable foundation in Poland. It also has the greatest social trust, in a survey conducted in 2020, 84% of people said that they trust WOŚP. During the previous finals 1.5 billion PLN was collected and 66 150 medical devices were bought to hospitals and medical centres. It is estimated that every fifth piece of equipment in Polish hospitals comes from WOŚP. The Orchestra collects funds mainly for treatment of children, but also for seniors. Occasionally, the foundation engages in other campaigns, such as in 2020, when Jurek Owsiak asked the Polish community in Australia to donate funds from the local collection for the victims of the fires that hit that country at the turn of 2019/2020.

Over the years, the number of volunteers and people helping WOŚP has grown tremendously. From the very beginning, people donated valuable personal items and souvenirs to the foundation, including jewelry that was later turned into gold hearts auctioned during the finals.  Today, helping is probably even easier, you can choose from various forms of support, collections are organized in many places and you can bid for various items and services at auctions. Eximius Park also wants to join the Great Orchestra of Christmas Charity. Even though we don’t have Paul McCartney’s autographed guitar or Olga Tokarczuk’s Nobel medal, we have prepared the best we can, our comfortable space. We invite you to bid for the lease of the Conference Center located in building 1000 of our complex. If you want to organize a corporate event or a training course, the modern, modular conference space is the right place for you. And if, in addition, we can participate in this noble initiative together, it’s a perfect combination.

Eximius Park plays together with WOŚP!  You can play too! 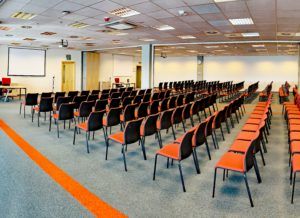